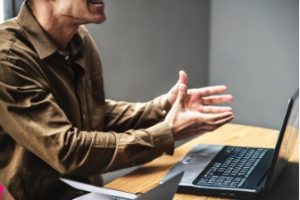 It’s been many moons since I personally have worked IN a large corporate environment.

With that said, there’s not a week that has gone by during each of those many moons that I haven’t been in dialogue with a client whose day to day life is in such a culture so…

It was with great interest that I read a really well-written piece by Harvey MacKay this morning and now thought to share here.

!!!If you’re not familiar with Harvey MacKay you probably should be…he’s a businessman, author and syndicated columnist (his weekly column gives career and inspirational advice is featured in over 100 newspapers). He’s also authored seven New York Times bestselling books, including three number one bestsellers….

We all get angry at work sometimes

Conflicts in the workplace can get out of hand when people stop listening to each other and instead concentrate on defending their positions. The late management guru Peter Drucker said:

“The only things that evolve by themselves in an organization are disorder, friction and malperformance”

In my opinion, the three are closely related. And most of those issues are caused by friction – workplace conflicts. Serious office feuds can really hurt productivity. It’s hard to use a computer when you’re wearing boxing gloves.

But conflict in the workplace doesn’t have to turn into full-scale war. Smart managers don’t let their emotions get out of control. Smart employees also need to keep their tempers in check. Before exploding at an employee or co-worker, remember this advice:

Listen to their story. You have to get problems out in the open before you can resolve them. Much of the time, an employee simply wants to be heard. Sit back and let the person speak. Employees will be more willing to listen to other points of view once they’ve had a chance to express their feelings. And if you realize you’re not saying anything constructive, stop talking. Let the other person continue until he or she realizes you’ve disengaged from the power struggle.

In all of my endeavors, both personal and professional…whether coaching youth of working with business professionals, it’s been made crystal clear to me and, as such is always top of mind fact that real caring = real listening which led me to…

“Seek first to understand, then to be understood”

There’s a little list of quotes on “LISTENING” below but suffice to say that folks like Mackay and Covey are not at all alone in their wisdom of stressing this skill.

I first read The 7 Habits back in the late ’80’s…as you’d see in many of my writings they’ve impacted me profoundly. (I’ll spare you stories about the number of specific ways this same “LISTEN” credo weaves through nearly every conversation and consultation in my world)

BE A GREAT LISTENER…

“Seek first to understand, then to be understood”…you’ll never, ever regret owning that skill!

P.S. If you haven’t read The 7 Habits of Highly Effective People or need a great, inexpensive gift for a friend allow me to suggest considering it’s purchase.

P.P.S. With the spirit of the holidays in mind, please allow me to provide you a copy of my own book on career success and job search sanity GRATIS  Get Barry’s Book, NO CHARGE  (Only through the end of 2018…)

(There aren’t tons of reviews yet…but they are all quite gracious and do capture the message I was trying to get across as well as the spirit of the message.)