Icons are seemingly everywhere these days…some with that status more well earned than others and then there are icons like Ringo! It was he, along with three other guys (each of whom, of course, hold iconic status in their own right…just with a far less cool name!) that changed the music world forever.

I’m offering these thoughts today for you to consider that knowing, believing and acting on this reality (aka Ringo’s Wisdom) may very well be the single greatest strategic and tactical advantage any of us have…in whatever we endeavor to do.

“Talent is cheaper than table salt. What separates the talented individual from the successful one is a lot of hard work.” – Stephen King

A major privilege of the work I do includes the opportunity to speak with and learn from individuals who occupy many walks of life and pretty much of all ages.

(Yesterday’s calendar alone included time with a coaching client, conducting search activity, three evening hours in the gym with kids 9-13 then dinner with an old friend/client who had just recently begun to contemplate retirement from his CFO world…)

Whether it was some of the kids (who wanted to take shortcuts during practice) or the CFO (who had decided that because he heard from someone that getting a seat on a Board here in Silicon Valley was pretty much “impossible”) OR my client from the week prior (CEO of a prominent Bay Area non-profit who at the time was “moved” to inaction because a consultant said “X Y Z” was too hard).

Is it just me or have many of us ascended(?) to a new level of lack of resolve, ingenuity, and action?

None of us like to be “called out” but I promise this (post) is actually au contraire!

There was a bumper sticker floating around back in the day that stated:

Not wanting to contribute to a problem I’m offering for your consideration some thoughts and resources that have been shared with me. (Maybe, possibly, hopefully) one or all of them will induce a renewed or new sense of a way to deal with the preponderance of “head trash” beset upon us these days.

“A lobster, when left high and dry among the rocks, has not instinct nor energy enough to work his way back to the sea, but waits for the sea to come to him. If it does not come, he remains where he is and dies, although the slightest effort would enable him to reach the waves, which are perhaps a few hundred yards from him.

The world is full of human lobsters: Stranded on the rocks of indecision and procrastination, who, instead of putting forth their own energies, are waiting for some grand billow of good fortune to set them afloat.”

Here are few resources that might help as well:

In her book “Scrappy: A Little Book About Choosing to Play Big” Terri Sjodin offers us some seemingly simple (straight out of my Philly playground roots) advice well worthy of our actions:

“It may be time to get a little scrappy – make a bigger effort, and shake things up to create new opportunities and connect with key decision makers.”

A scrappy effort is a winning mix of attitude, strategy, and execution…whatever your goal, keep in mind that you don’t have to score on every play – just advance/move the ball.  Small actions can have a big impact.

2. Disrupt Yourself – (Disrupt 1a: to break apart b: to throw into disorder 2: to interrupt the normal course or unity of… )

During early November I had the opportunity to have breakfast with, learn from and essentially be mentored by Jay Samit, author of Disrupt You .

After reading it I’d now argue long and loud that it’s a book that Disrupt You should be read by anyone interested in the world as it now is and should be required reading to all college students everywhere. (If you’re cynical and think Jay needs books sales and I’m helping that happen you’re beyond help!!)

Everyone from the Pope to the President calls on Jay to orchestrate positive change…in this era of endless innovation. He’s helped grow pre-IPO companies such as Linkedin, held senior management roles at Sony and Universal Studios, pioneered breakthrough advancements in mobile video, internet advertising, ecommerce, social networks, ebooks, and digital music that are used by billions of consumers every day. He’s been able to accurately predict the future because he is constantly working with those who create it.

(As I discussed my newly formalized non-profit The Fifth Quarter Project, Jay almost instantly provided a thought that sat me straight up in my chair…it was so simple to see and finding simple among the clutter is clearly his genius)

Look…as I write this there are more than 200,000 people who’ve lost their homes up in Paradise, CA. The death toll continues to mount from the catastrophe.

*2018 has been one of the most destructive wildfire seasons on record in California, with a total of 7,579 fires burning an area of 1,667,855 acres the largest amount of burned acreage recorded in a fire season

The TRUTH from what I’ve been privileged to observe…? There clearly is no sweeping 100% accurate dogma for any of us except this…

If you wind up buying either of these books and think they’re more rubbish than worth what you paid please just write to me and let me know…I’ll gladly buy back your copy!

“It don’t come easy”…that’s as clear as clear can be, however…

It’d be a difficult argument to win if you were to argue against the gift each of us has to be able to play…to be in the game!!! 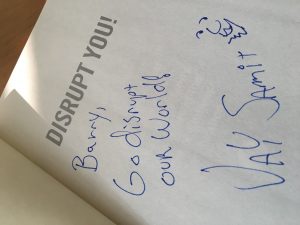 If a copy of my book helps lighten your load…helps you gain some clarity or is an impetus to be scrappy it’s here for the taking…my treat: https://barrykleiman.com/get-free-book/